Take a closer look at porridge, a breakfast dish with a rich history and countless different varieties, both sweet and savory.

If you’re a fan of a hearty, filling breakfast, you’re probably familiar with porridge – at least what it looks like and how it tastes.

But what is porridge, really, and what’s the story behind this age-old breakfast staple?

We love increasing our knowledge on the most important meal of the day! Let’s find out more!

Porridge refers to any ground-up grains that you eat hot. It’s traditionally eaten for breakfast and paired with toppings that make it either sweet or savory. Common sweet toppings for porridge include honey, fruit, maple syrup, and straight sugar. As for savory porridge, you might find this dish made with cooked vegetables, broth, meat, salt, and pepper.

Before we take a look at the different types of porridge and the ways to make it, let’s first look back through history at the origins of this simple breakfast.

The History of Porridge

As is the case with so many parts of life, the best place to start with porridge is the very beginning. The history of porridge traces all the way back to the paleolithic era during the earliest stages of human cooking. Over time, eating bowls of hot grains became a common breakfast around the world.

One of the most commonly eaten types of porridge is oatmeal, which has its roots in Scotland centuries ago. The Scots were some of the first people to eat cooked oats in a way that is similar to modern bowls of oatmeal. The English, meanwhile, primarily fed oats to horses.

The Many Types of Porridge

People enjoy porridge for breakfast around the world, and that means there are countless types of porridge made with a plethora of different grains. From atole to zganci, let’s look at the many types of porridge eaten worldwide.

Atole is a Mexican porridge made with corn flour mixed with either water or milk. This type of porridge is technically a drink, and it includes sweet ingredients like chocolate and vanilla, along with spices like cinnamon and panela, a type of raw sugar. Many Mexicans love drinking atole during the Day of the Dead.

Grits are a dish made with ground hominy. Served with either sweet or savory toppings, grits come from the Southern United States – they’re actually the state of Georgia’s official food. You’ll often find them served with cheese, butter, salt, and pepper as toppings.

Oatmeal, also known as oat porridge, is the most popular type of porridge in the United States, the UK, Germany, and Scandinavia. While some people enjoy savory oatmeal, it’s typically served sweet.

Try some of our oatmeal favorites:

This is not to be confused with Mexican champurrado! In the Philippines, many cooks enjoy making champorado, a rice porridge sweetened with chocolate. The main ingredients in champorado are cocoa powder, sticky rice, milk, and sugar.

Cream of Wheat gained popularity around the turn of the 20th century in the United States. First created in North Dakota, Cream of Wheat still has some loyal fans today. Some people enjoy eating it with added salt and hot sauce, while others mix in a bit of brown sugar and butter.

One of the most popular types of porridge in Norway is potato porridge, which is just a little bit thinner in consistency and texture than mashed potatoes.

In Nigeria, some families eat sweet potato porridge for breakfast. This dish is sometimes called pottage. While it’s often eaten at breakfast, pottage is also a typical lunch or dinner in Nigeria.

These are just a few of the most popular types of porridge eaten around the world. The full-length list of porridges is too long to include in this post, but there are countless other recipes made with different grains like barley!

If you’re ever feeling curious and want something new for breakfast, try making one of the types of porridge that isn’t common where you live. If you’re from the United States, for example, and want to swap your oatmeal for something different, try making potato porridge or champorado instead. 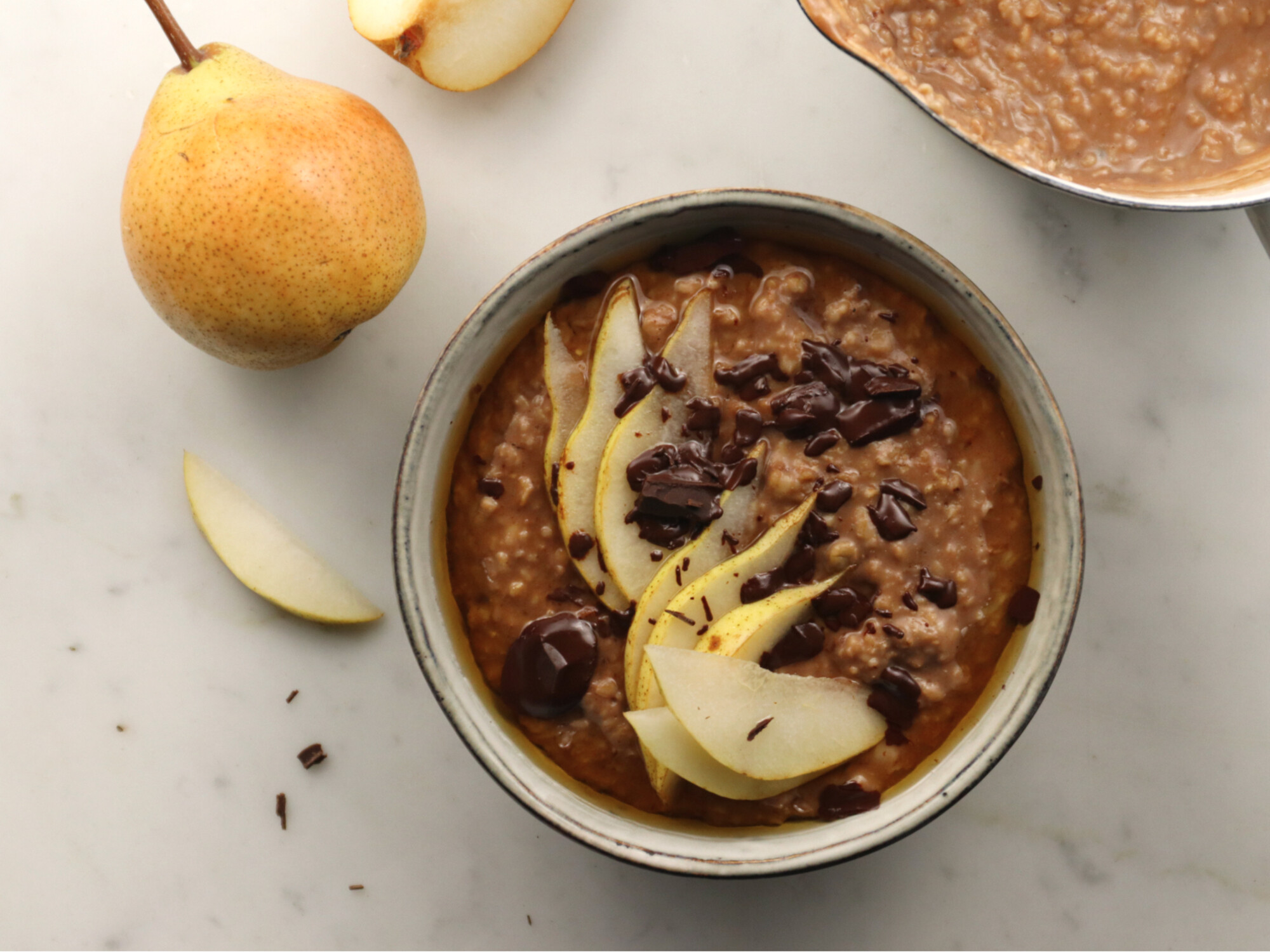 Is Porridge Good for You?

Starting the day off right means eating a hearty breakfast that keeps you full and energized until lunch. That’s why so many cultures around the world love porridge and make it with a variety of different grains and added ingredients.

But is porridge a healthy breakfast? Let’s take a look at some of the aspects of this popular AM meal that might make it a healthy choice – or a not-so-healthy one.

What Nutrients Are in Porridge?

Overall, porridge has plenty of nutritional value on its own, especially the varieties that you cook using whole grains.

A typical serving of porridge contains minerals like calcium, iron, magnesium, manganese, phosphorus, potassium, and zinc, as well as B-complex vitamins and vitamin E. Porridge also provides you with some fiber, which aids in healthy digestion and keeps you regular.

As far as macronutrients – carbohydrates, fat, and protein – go, porridge mostly contains carbs. A small serving of porridge provides you with about 12 grams of carbohydrates, while a larger serving contains between 20 and 30 grams. Depending on the type of grains in your porridge, these carbohydrates might be either simple or complex.

Complex carbohydrate sources, including oats, barley, and whole-grain wheat, are some of the healthiest grains to eat in the morning. This is because they’re slow to digest and have a lower impact on blood sugar. However, there’s nothing wrong with eating rice or potato-based porridge from time to time, even though these types of porridge provide you with more simple carbs than complex ones.

Porridge Is All About the Toppings

When making porridge, the biggest deciding factor that makes your breakfast healthy is the extra ingredients you add to your bowl. Throwing in tons of sugar and butter makes your porridge a rich, sweet treat, but it’s probably not the best breakfast choice for every day of the week.

Enjoying some sweet porridge as a treat is perfectly fine. However, making porridge with savory ingredients and a bit less sugar is a healthier choice overall. Adding in a bit of butter, some salt and pepper, and even a fried egg makes a delicious savory breakfast without any extra sugar needed. In addition, adding toppings like eggs and meat to your porridge gives your breakfast a protein boost.

So, is porridge healthy? In its simplest form, it definitely is. Adding too many sweet, sugary ingredients to your porridge makes it more of a dessert-for-breakfast kind of meal than one that you’d want to eat every day.

If you love making oatmeal for breakfast and love it when every bite has something sweet in it, you’re in luck. While sprinkling lots of sugar or maple syrup on your oatmeal isn’t the healthiest choice, adding in some fresh or dried fruit is an excellent alternative.

Including fruit in your oatmeal adds that sweetness that you’re craving without forcing you to use spoonfuls of sugar. Some of our favorite fruits for oatmeal include sliced bananas, berries, and chopped apples, all of which taste amazing when combined with a spoonful of peanut butter or almond butter. Mix these ingredients in your oatmeal, and you’ll have an unbelievably simple and delicious breakfast in no time.

Millions of people around the world love eating porridge for breakfast, and this simple dish is so popular for a reason. It’s nourishing and satisfying, and there are countless ways to switch it up with tasty added ingredients.

Every Action Counts: Eco-Friendly Cooking Habits to Adopt in 2023

Reduce your carbon footprint and save money on your energy bill with these simple tips! 💚

No more wondering what to cook for dinner—dive into our newest recipes from the month of January!

10 Food Resolutions and Healthy Habits for 2023

It’s that time of year again (somehow already??) where it’s time to not only look forward to the new year, but also set some new goals!