All About Cheese: How Was Cheese Invented?

Do you know how cheese was invented? Click here to learn more about cheese and explore tasty cheesy recipes while you're at it!

Reminisce on all the times in your life when you’ve enjoyed a gooey cheese pizza, a perfectly-toasted grilled cheddar cheese sandwich, or creamy queso with tortilla chips. There’s camembert and feta, gouda and cottage cheese — the variety really is endless.

You might be wondering where this milky, tangy substance originates. Like many outstanding elements of life, cheese has a historical beginning that is incredibly intriguing. Learning about the facts and myths about cheese’s history will give you even more appreciation for this simple pleasure of life.

It’s popular in Europe, both the Americas, the Middle East, and some places in Asia and Africa as well. So, where did cheese come from?

Today, let’s unveil the mystery of the origins of cheese. We’ll talk about how cheese forms, and then we’ll explore tasty, cheesy recipes you can try this week.

The Truth About Cheese’s Formation

Where does cheese come from, anyway?

Essentially, the production of cheese begins with milk. Milk contains two proteins called whey and casein and a milk sugar called lactose. As milk ages, the bacteria in the milk begins to form quickly, and the casein and whey begin to digest the lactose to produce lactic acid. Lactic acid then causes the milk to curdle and develop a sour smell.

Often, people discover this evolution by accident. If you’ve ever had a carton of milk expire, you may have noticed the way it changed consistency. Although this process may seem unsavory at first, it’s the reason we have cheese as we know it today.

Cheese forms from curdled milk. Today, most of the cheese you’ll encounter at grocery stores or restaurants comes from cheese factories that produce it in mass amounts. The dairy industry truly is booming.

How Is Cheese Made?

Here’s a quick rundown of the cheesemaking process:

First, milk fills a giant vat. Next, workers add a culture of bacteria to the milk that will produce lactic acid and begin the cheese-forming evolution. After inducing the production of lactic acid, cheesemakers add in an ingredient called rennet, which is an enzyme that prompts the curdling of milk.

Finally, cheesemakers press the clumps of casein into molds and leave them to age into delicious cheese.

What We Know About the History of Cheese

How did we discover cheese? It doesn’t occur naturally, so who were the first people to figure out how to make this tasty food? While there wasn’t one single inventor of cheese, looking at how civilization has influenced the popularity of cheese is exciting.

Again, we find that cheese begins with milk. Before people could make cheese, they had to discover milking animals. Research suggests that people started to milk animals around the fourth millennium BCE in the Fertile Crescent region.

The specific date is a guess. Many findings suggest that people were milking animals as early as 8,000 BCE.

Even though many of the facts surrounding cheese’s beginnings are uncertain, some suggest that we know the first type of cheese that was likely discovered. The way this probably happened could surprise you, but it makes total sense.

One likely reason people discovered cheese is through the transportation of milk in sheep’s stomachs (or the stomachs of other ruminants). That’s right – these ancient milk transporters used to separate a sheep’s stomach from its body and use it to transport milk on their journeys. As we’ve discussed, the bacteria in milk can multiply when it’s aging or exposed to the right enzymes. Weirdly enough, sheep stomachs contain rennin (which is related to rennet) which causes milk to curdle.

So there you have it: cheese curds were most likely one of the first forms of cheese mankind ever discovered. It’s a long way off from the American and brie that we’re used to today!

The Creation of the Cheese Factory

The first cheese factory was most likely created in 1851 in New York by a dairy farmer named Jesse Williams. He used the milk from local farms to create cheese in assembly-line fashion. That said, his factory doesn’t look much of anything like the factories that exist today.

Today, cheese is made all over the world. You’ll find dairy farms globally, all of which make their own particular kinds of artisan cheese.

Certain locations are more famous than others, however. Here are a few places that are well-known for their cheesemaking abilities.

Common Myths About the Cheese’s Origins

Although cheese’s origins aren’t exact, that hasn’t stopped people from coming up with wild stories about its beginnings. There are several common myths about where cheese began. Let’s explore the big ones.

One Hellenic myth claims Aristaeus first discovered cheese. In this story, the Greek character Aristaeus found a host of mystical talents – one being dairying. From this knowledge, he discovered how to make dairy products such as butter, yogurt, and cheese.

Another myth credits an Arabian traveler with the creation of cheese. In this well-known tale, an Arabian shepherd boy crosses a desert and carries an animal stomach pouch full of milk that spoils and curdles. This tale is not far from how others have suspected that cheese was first discovered. Even if it’s not quite true, it’s a fun story that has helped people learn how cheese forms.

What does archaeology have to do with cheese? When trying to understand the history of cheese, we have little to go off of as a society since food decays quickly.

One of the more concrete pieces of cheese evidence has to do with pottery found in Croatia from 8,000 years ago. When archaeologists found this pottery, they discovered it contained evidence of fermented milk, which could mean the pottery contained cheese or yogurt in its day.

Egyptians also loved cheese, and archaeology shows it. One First Dynasty Egyptian king was even buried with two jars of cheese in his tomb. Many Egyptian tomb murals show evidence of cheesemaking.

Croatia and Egypt are just two of the many recorded civilizations that had an appreciation for cheese. It was also popular during the Roman Empire throughout their territory. For thousands of years, it’s been a staple grocery item, and we definitely understand why. 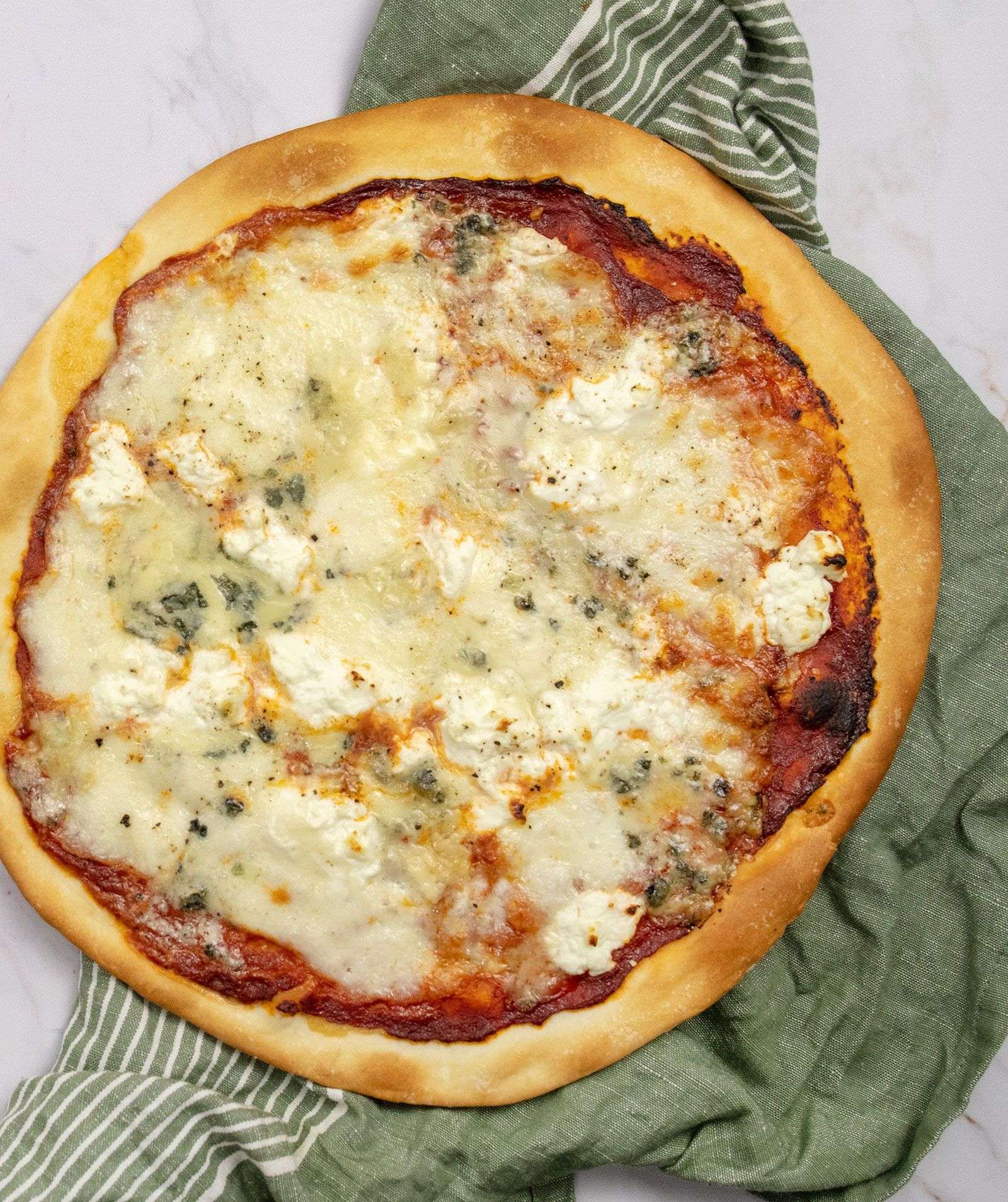 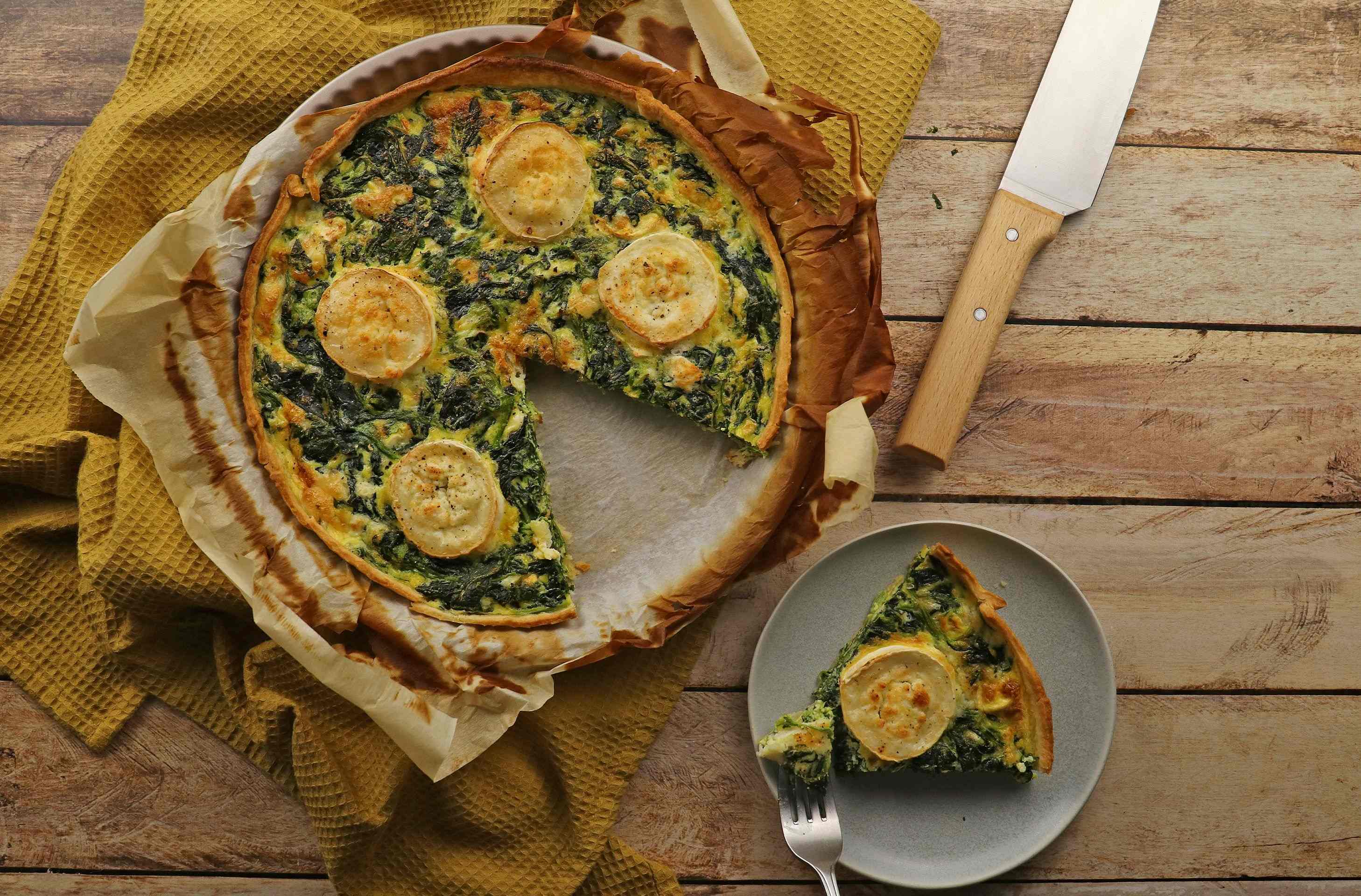 Cheese is a fascinating food, no matter how you slice it. If you’re a long-time cheese-lover, you might enjoy incorporating new recipes into your rotation periodically. If you’re ready to try fresh savory dinners with creamy cheese in the ingredients, we’ve got several ideas for you.

Let’s check out 8 cheesy dinner recipes that are ready before you know it.

Whether you’re preparing a meal for hungry teenagers, little ones, or for yourself, you can’t go wrong with cheese pizza. There’s a reason this classic pie has been a go-to favorite for decades.

Our three-cheese pizza recipe is ready in fifteen minutes, so it may very well become a favorite for you, too.

Who really outgrows mac and cheese? Our ham and cheese pasta dish combines buttery Monterey Jack cheese with filling pasta and sliced ham. Stick it in the oven for ten minutes, and enjoy your delicious result.

Who said you can’t enjoy quiche for dinner? Whether you choose to make our goat cheese and spinach quiche in the morning or evening, you’ll want to savor every bite. You might pair it with fruit or serve it alone.

Cheese Ravioli With Pears and Walnuts

There’s so much to love about baked sweet potatoes already. The addition of blue cheese, sour cream, and arugula makes this dish an excellent choice for your next dinner party or home-cooked meal for one. Sprinkle walnuts on top for a little bit of crunch.

This vegetarian-friendly rigatoni will have your mouth watering in no time. Each bite contains creamy ricotta cheese with fresh eggplant and savory tomato basil sauce. This recipe is ready in twenty-five minutes, so you can save time in the kitchen and spend more time with people you love.

If you’re avoiding gluten, you can still enjoy the wonderful taste of lasagna. Our eggplant lasagna stands up to the taste test even without the pasta. And the mozzarella and parmesan in this dish are sure to delight any cheese-lover.

Enjoy shredded mozzarella in this delicious gnocchi dish. Your dinner will be ready in no time!

More Cheesy Bites You Can Try This Week

Sometimes, a light after-dinner snack is necessary. Here are a few ideas you can keep on deck when you’d prefer a salty-sweet dish.

Here’s How Jow Can Help Lighten Your Load

How often do you get into the kitchen to try new recipes? Do you wait for guests to visit your house, or do you enjoy trying fresh meals for yourself?

If you tend to avoid the kitchen, know that cooking doesn’t have to be a chore. We can help make your mealtimes easier, from grocery shopping to cooking and serving your dishes.

At Jow, we’re your personal grocery shopper and can help you curate the perfect list for your household. Add a few everyday items to your shopping list, too. We’ll send your groceries to a nearby store, and you can have them delivered to your doorstep or awaiting your store pickup.

You Deserve To Enjoy Making Meals

While we love the history of our favorite foods, our real purpose is the idea that making meals should be fun. Following our cheesy dinner recipes can help you simplify your cooking. We’ll help you get everything together!

The history of cheese is mysterious and amazing at the same time. If you’re a cheese enthusiast, we’ve got a few more fun facts to interest you. Then, we’ll explore quick, cheesy recipes you can try out this week.

Every Action Counts: Eco-Friendly Cooking Habits to Adopt in 2023

Reduce your carbon footprint and save money on your energy bill with these simple tips! 💚

No more wondering what to cook for dinner—dive into our newest recipes from the month of January!

10 Food Resolutions and Healthy Habits for 2023

It’s that time of year again (somehow already??) where it’s time to not only look forward to the new year, but also set some new goals!